Home News Analysis-France braces for uncertain winter as nuclear power shortage looms
Our website publishes news, press releases, opinion and advertorials on various financial organizations, products and services which are commissioned from various Companies, Organizations, PR agencies, Bloggers etc. These commissioned articles are commercial in nature. This is not to be considered as financial advice and should be considered only for information purposes. It does not reflect the views or opinion of our website and is not to be considered an endorsement or a recommendation. We cannot guarantee the accuracy or applicability of any information provided with respect to your individual or personal circumstances. Please seek Professional advice from a qualified professional before making any financial decisions. We link to various third-party websites, affiliate sales networks, and to our advertising partners websites. When you view or click on certain links available on our articles, our partners may compensate us for displaying the content to you or make a purchase or fill a form. This will not incur any additional charges to you. To make things simpler for you to identity or distinguish advertised or sponsored articles or links, you may consider all articles or links hosted on our site as a commercial article placement. We will not be responsible for any loss you may suffer as a result of any omission or inaccuracy on the website.
News 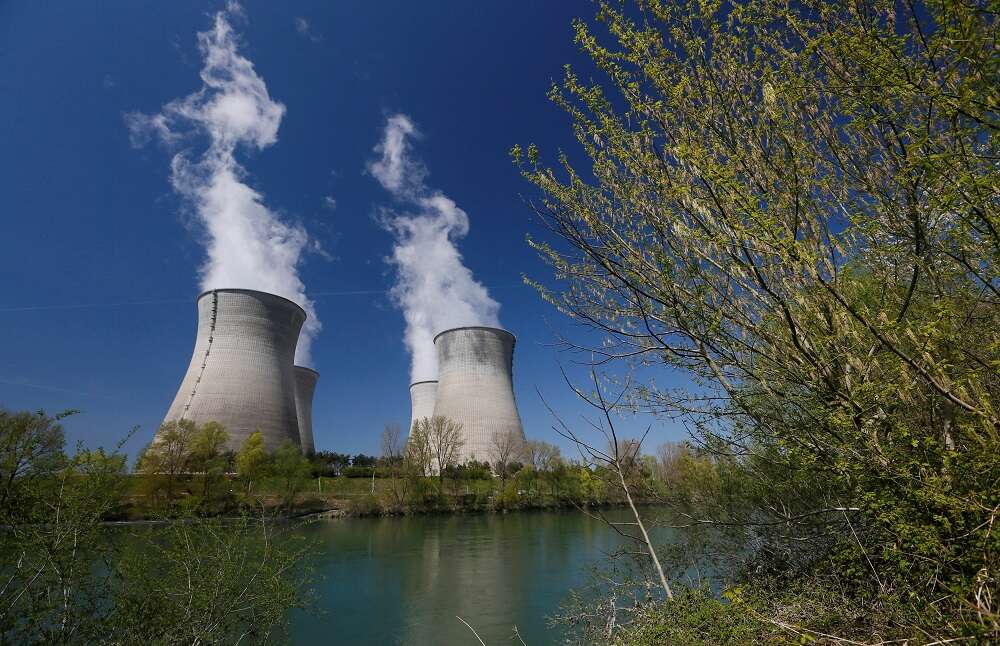 PARIS (Reuters) – France, once Europe’s top power exporter, may not produce enough nuclear energy this winter to help European neighbours seeking alternatives to Russian gas, and may even have to ration electricity to meet its own needs.

France has for years helped to underpin Europe’s electricity supply, providing about 15% of the region’s total power generation.

But this year, for the first time since French records began in 2012, France has become a net power importer as its own production of nuclear energy hit a 30-year low, based on data from consultancy EnAppSys.

The supply squeeze, caused by a wave of repairs at the country’s nuclear power stations, couldn’t have come at a worse time. Europe is in the grip of an energy crisis as Russian gas supplies plummet in the wake of the Ukraine conflict and France, which derives 70% of its electricity from nuclear energy, has lost its edge.

French power prices have hit a string of all-time highs – topping 1,000 euros ($1,004.10) per megawatt hour earlier this month – on expectations the country will not have enough electricity to meet domestic demand. That surge, from prices of around 70 euros a year ago, has added to a cost-of-living crisis.

Forecasts for French nuclear supply this winter are less optimistic than the current schedule following a 30 year low in 2022 https://fingfx.thomsonreuters.com/gfx/mkt/zjvqkbxdjvx/Full%20year%20forecasts.png 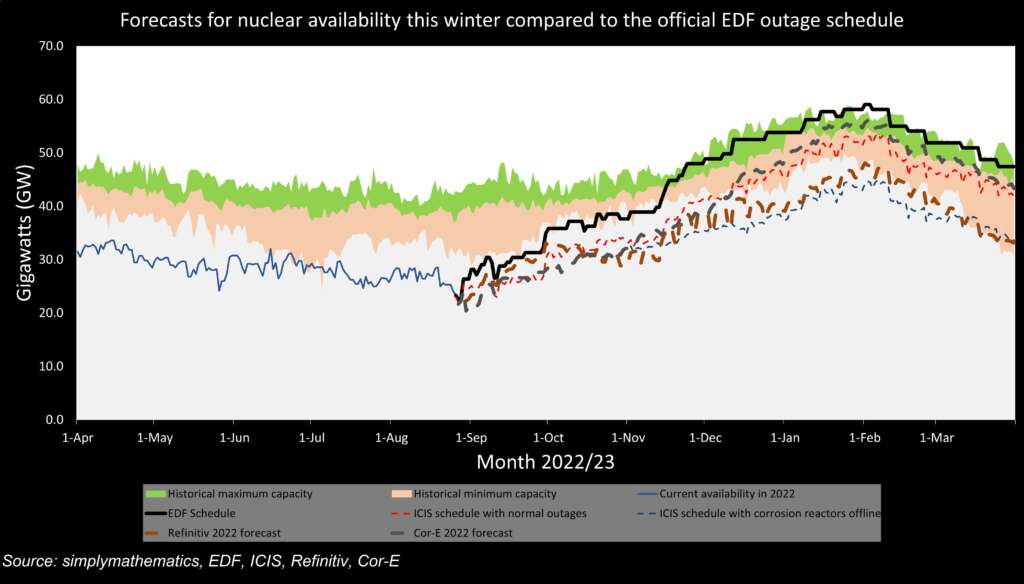 A record number of France’s 56 nuclear reactors have gone offline for overdue maintenance and checks related to corrosion issues that first surfaced last December. Some reactors have had to cut production during the summer to prevent rivers used to cool reactors from overheating.

As of Aug. 29, 57% of nuclear generation capacity was offline, based on data provided by state-controlled nuclear power group Electricite de France, or EDF.

EDF’s current outage schedule sees production levels returning to around 50 gigawatts (GW) daily by December from around 27 GW now as reactors gradually come back for the winter season. 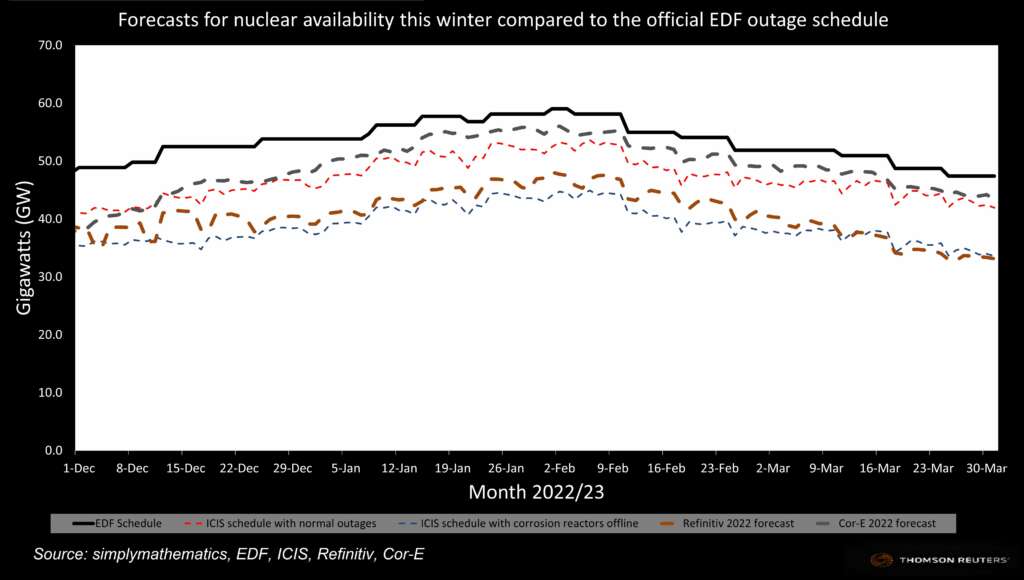 But the market, analysts and union officials think that forecast is too optimistic.

In a normal year, France produces around 400 terawatt-hours (or 400,000 GWh) of nuclear electricity and exports about 10% of it in warmer months. But during winter consumption peaks, France imports power from its neighbours, particularly Germany.

This year, EDF forecasts French nuclear production at 280-300 terawatt-hours, the lowest since 1993. France has imported power from the likes of Germany and Belgium during the summer, when it would usually be exporting it. 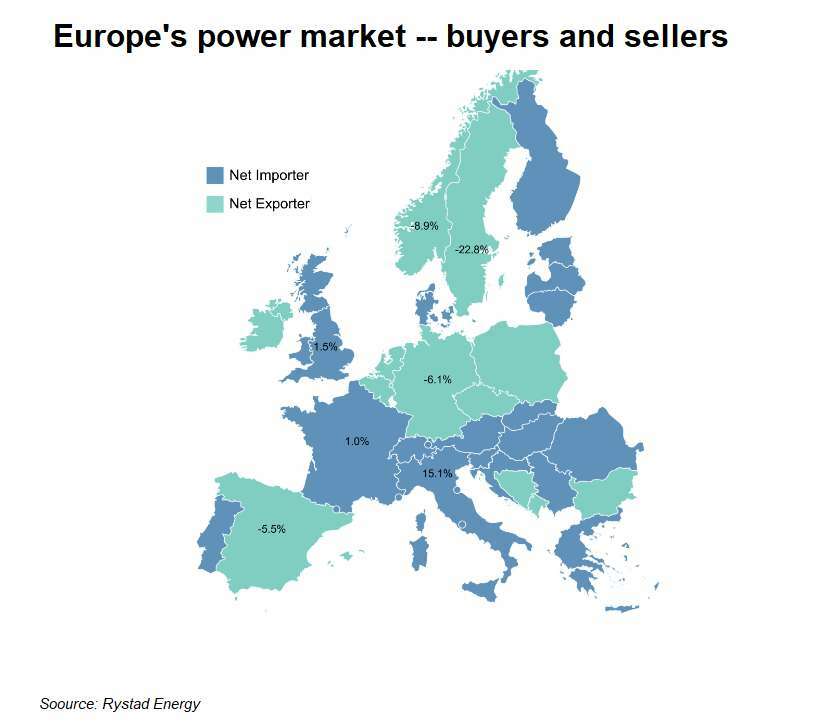 Six analysts polled by Reuters estimated that France’s power capacity during the winter will fall below EDF’s forecasts, by 10 to 15 GW a day until at least late January. This means France will need to import more power when the rest of Europe will also be facing an energy crunch, or risk blackouts.

Current power market prices reveal a lack of confidence in EDF’s ability to put all its reactors back online in time for the cold season, a parliamentary source close to government said, although this source also said the availability of the fleet should improve from current low levels.

“We should be able to recover a large part of the reactors which are currently offline,” the source said. “We can also ask the French to make efforts, especially to reduce consumption peaks.”

The measures the French government could take include forced interruption of power supply to industrial and commercial consumers, reduced heating in public buildings, turning off street lights and controlled power cuts, he said.

French Prime Minister Elisabeth Borne has urged companies to draft energy savings plans by next month, warning they would be hit first if France has to ration gas and electricity.

The CGT union, France’s biggest, is bracing for some rolling blackouts this winter.

“The situation is really worrying… to say that there won’t be power cuts is a very optimistic gamble, unless one already knows for sure that the winter will be warm,” said Virginie Neumayer, who follows nuclear issues at CGT.

Even if EDF can boost nuclear production, analysts say France will still not have spare power to sell to neighbours starved of Russian gas, with Italy, Britain and Switzerland seen as the countries worst hit.

“We have seen some effects over the last months already, as Spain, the UK and Italy all have had to increase their domestic production, since export volumes from France have been much lower than normal,” said Fabian Ronningen of consultancy Rystad Energy.

“I think Italy would be the most affected country (if France stopped exporting electricity), as they are Europe’s overall largest power importer.”

EDF CEO Jean-Bernard Levy said on Monday that among the reactors that are closed, 12 were for corrosion problems and the rest were either shut for routine maintenance delayed by the pandemic or taken off-line to prepare them for winter.

“These works are heavy, we will need hundreds and hundreds of very skilled people, we are making them come from abroad, the U.S. in particular,” he told a business conference. He said corrosion issues required workers to operate in a part of the reactor where radiation is high, meaning exposure had to be limited.

For the coming winter, meteorologists often look at how the La Niña weather pattern develops over the summer as an indicator of a colder than average winter.

Currently, the odds of that happening are at 60% during December-February 2022-23, U.S. government weather forecaster the National Weather Service’s Climate Prediction Center said.

Longer term, questions remain over whether EDF, which is in the process of being fully nationalised, can maintain its ageing fleet of existing power stations – mostly build in the 1980s – or build new ones quickly enough to replace them.

The next generation nuclear reactors EDF has built – including one in Flamanville in France, and another at Hinkley Point in England – have run billions over budget and several years beyond schedule.

(Additional reporting by Benjamin Mallet and Leigh Thomas in Paris and Francesca Landini in Milan, editing by Jane Merriman)

Shares and bonds stabilise on pause in bad news

Oil slides more than $3 on inflation and Iraq exports