Home News European gas price surge prompts switch to coal
Our website publishes news, press releases, opinion and advertorials on various financial organizations, products and services which are commissioned from various Companies, Organizations, PR agencies, Bloggers etc. These commissioned articles are commercial in nature. This is not to be considered as financial advice and should be considered only for information purposes. It does not reflect the views or opinion of our website and is not to be considered an endorsement or a recommendation. We cannot guarantee the accuracy or applicability of any information provided with respect to your individual or personal circumstances. Please seek Professional advice from a qualified professional before making any financial decisions. We link to various third-party websites, affiliate sales networks, and to our advertising partners websites. When you view or click on certain links available on our articles, our partners may compensate us for displaying the content to you or make a purchase or fill a form. This will not incur any additional charges to you. To make things simpler for you to identity or distinguish advertised or sponsored articles or links, you may consider all articles or links hosted on our site as a commercial article placement. We will not be responsible for any loss you may suffer as a result of any omission or inaccuracy on the website.
News 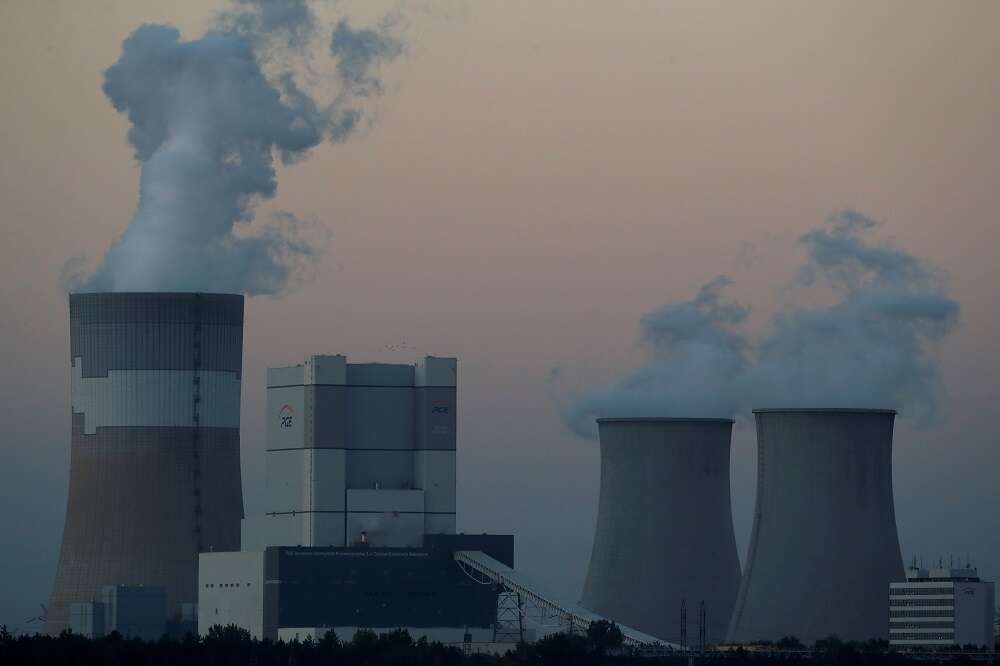 Although European coal and carbon prices have also jumped in recent months, they have lagged the spike in gas prices, causing short-term marginal costs to shift in favour of using coal to generate electricity.

Benchmark carbon permit prices under the European Union’s Emissions Trading System (ETS) have almost doubled since the start of the year while European coal futures are more than twice as high. Wholesale Dutch gas prices, however, are almost four times higher than at the start of 2021. 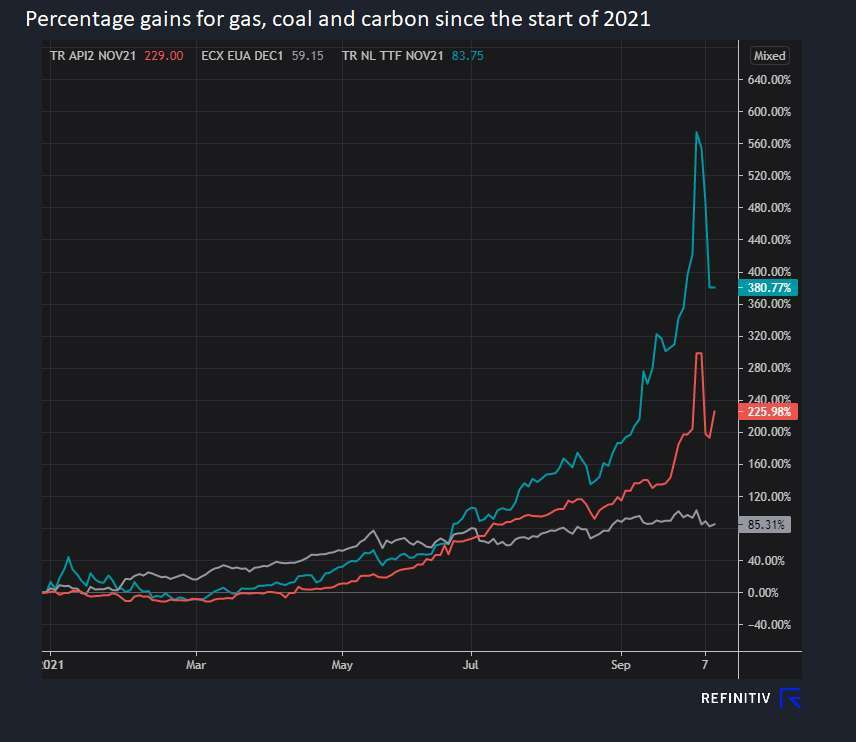 Graphic: Gas, CO2 and Coal rebased to the start of the year, showing percentage gains: https://fingfx.thomsonreuters.com/gfx/mkt/egpbkmyoovq/Gas%20CO2%20and%20coal%20rebased%20to%20the%20start%20of%20the%20year.jpeg

Ahead of the next round of United Nations climate talks in Scotland in November, the EU has been encouraging other big polluters to commit to more ambitious climate targets and move away from coal-fired power.

The EU’s ETS, the main tool for curbing greenhouse gas emissions, charges power plants and factories for each tonne of carbon dioxide they emit.

Gas-fired power plants had been cheaper to operate than their coal-burning equivalents for more than two years due to the added cost of carbon emissions, but that changed in around July this year.

“While European coal generation was handcuffed by record carbon prices in the early parts of the summer, soaring TTF (Dutch gas) prices have now unlocked the gas-to-coal switching lever,” said analysts at Bank of America.

High gas prices have also prompted a switch to oil in Britain, where coal accounts for just 2% of the power mix, with the country facing tight electricity supplies this winter.

In Germany, July’s reversal in the difference between the “clean dark” and “clean spark” year-ahead spreads – which measure the value of operating coal-fired and gas-fired plants after accounting for carbon emissions – prompted greater use of brown coal, or lignite, a traditionally cheaper fuel source which was being driven out of the market by rising carbon permit prices. 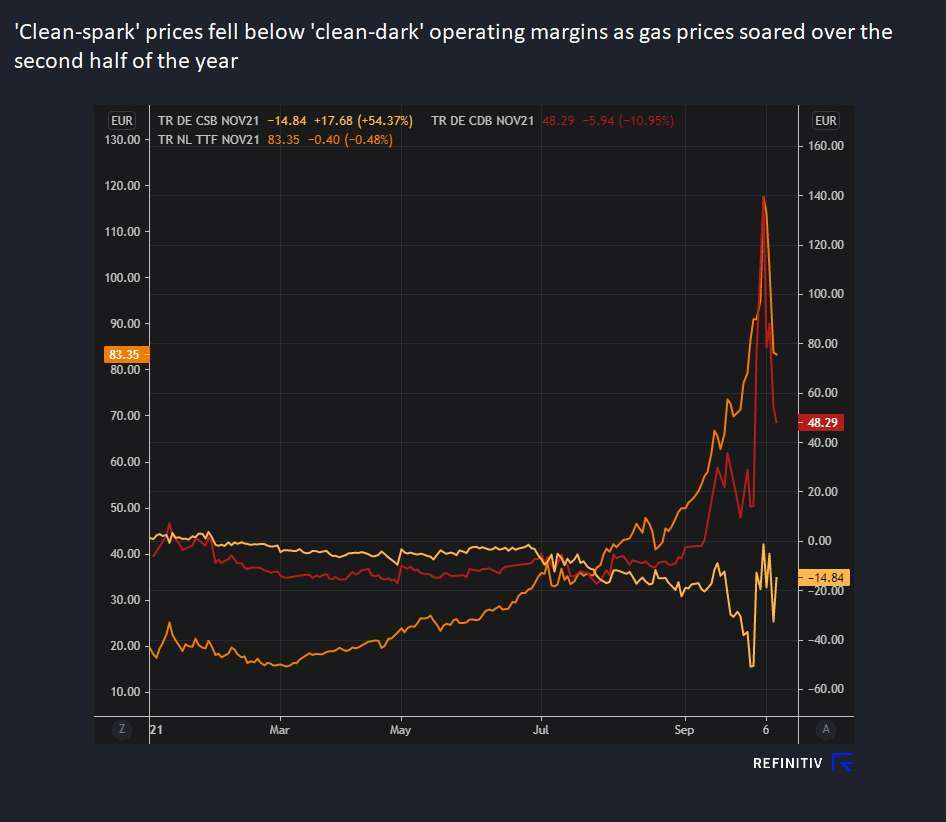 “The electricity transition is happening but not with the urgency required: emissions are going in the wrong direction,” said climate thinktank Ember’s global lead Dave Jones.

Looking at the next couple of quarters, coal and lignite are expected to remain more convenient in the fuel mix than gas, said Silvia Messa, analyst at energy consultancy Volue.

Forward electricity prices in Germany and France have more than doubled since January, rising with fuel and carbon prices, and prompting talks of intervention in the market to stabilise prices for consumers. 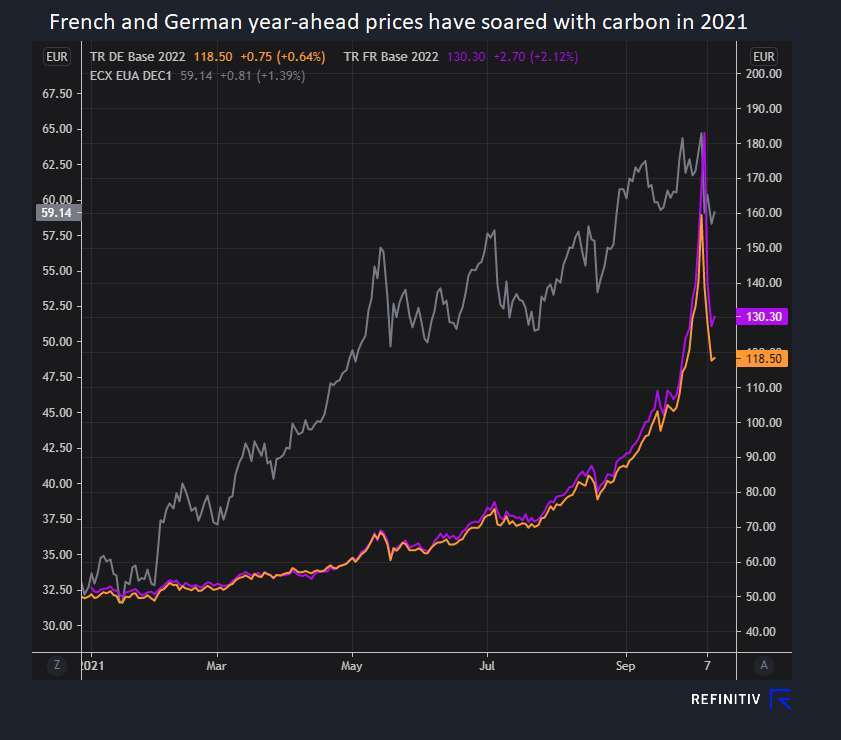 Some critics blame the EU ETS for the spike in fuel prices, and are calling for regulations to curb the effect of the emissions scheme on the energy market.

However, the current fuel-switch environment should be seen as a short-term flexibility problem and should not be blamed on the scheme, THEMA analyst Marcus Ferdinand said.