Home News European shares trip on recession fears as German producer prices surge
Our website publishes news, press releases, opinion and advertorials on various financial organizations, products and services which are commissioned from various Companies, Organizations, PR agencies, Bloggers etc. These commissioned articles are commercial in nature. This is not to be considered as financial advice and should be considered only for information purposes. It does not reflect the views or opinion of our website and is not to be considered an endorsement or a recommendation. We cannot guarantee the accuracy or applicability of any information provided with respect to your individual or personal circumstances. Please seek Professional advice from a qualified professional before making any financial decisions. We link to various third-party websites, affiliate sales networks, and to our advertising partners websites. When you view or click on certain links available on our articles, our partners may compensate us for displaying the content to you or make a purchase or fill a form. This will not incur any additional charges to you. To make things simpler for you to identity or distinguish advertised or sponsored articles or links, you may consider all articles or links hosted on our site as a commercial article placement. We will not be responsible for any loss you may suffer as a result of any omission or inaccuracy on the website.
News 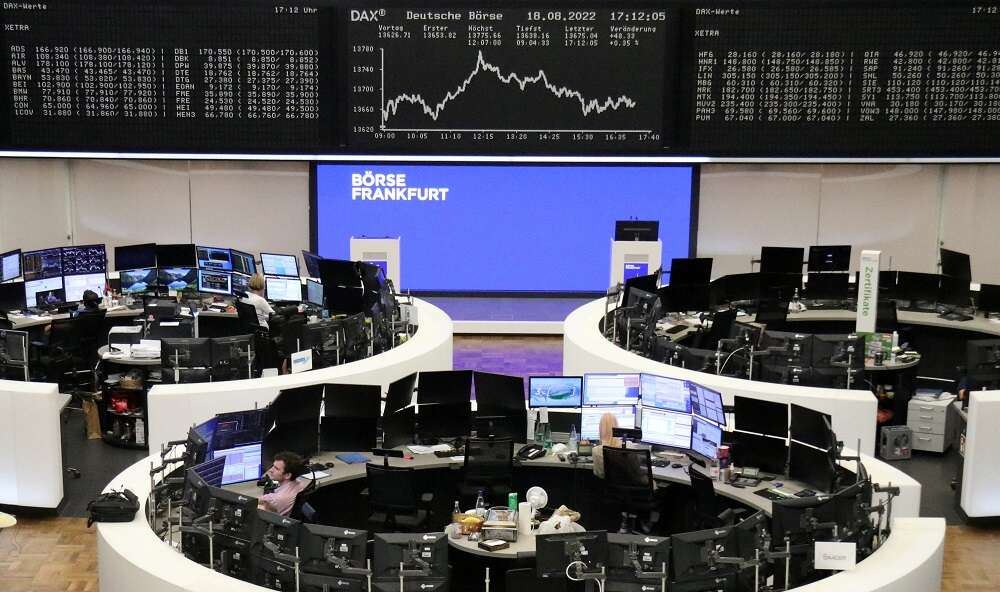 (Reuters) -European shares tumbled on Friday and tracked a weekly loss as the highest-ever jump in German producer prices in July added to gloom over the economic outlook for the region’s biggest economy and rekindled fears of a recession.

The pan-European STOXX 600 slid 0.6% in early deals, with travel stocks leading the declines.

Energy stocks were among the few outperformers on the day and week, inching 0.1% higher on Friday.

“Energy costs are only expected to go up as winter in the Northern Hemisphere kicks in… European energy is the sector that’s going to be able to ride through the current environment,” said Danni Hewson, financial analyst at AJ Bell.

Skyrocketing energy prices due to the Ukraine war pushed German producer prices in July to their highest ever increases both year-on-year and month-on-month. Energy prices as a whole jumped 105%, compared with July 2021.

Germany’s DAX lost 1% and the country’s 10-year yields rose to their highest in four weeks. [GVD/EUR]

“The European Central Bank is going to have to keep raising rates, because otherwise people will begin to question their credibility even further… We’re likely going to see a hike of the same size as they have already done, but whether there would be a more aggressive move is anyone’s guess, since they are walking such a tightrope,” Hewson added.

Money markets are raising their bets on ECB hikes, moving to fully price in a 50 basis point (bps) hike in September, compared to the 50% chance of such a move priced in early August. They are also pricing in a small probability of a 75 bps move at the meeting. [GVD/EUR]

The benchmark index is set to end the week about 0.3% weaker as investors weigh weak economic data, the impact of tighter monetary policy, fears of spiralling inflation and shrinking economies across the region. It gained more than 1% last week.

French catering and food services group Sodexo fell 2%, after Jefferies cut the stock to “hold” from “buy” to factor in a cautious recessionary scenario over fiscal year 2023-2024.

Just Eat Takeaway.com surged 25.9% to top the STOXX 600 after agreeing to sell 33% stake in Brazil’s iFood to technology investor Prosus for up to 1.8 billion euros ($1.8 billion). Prosus shares ticked up 0.1%.

(Reporting by Anisha Sircar in Bengaluru; editing by Uttaresh.V and Sriraj Kalluvila)