Home News European stocks hits lowest in nearly a month on looming energy crisis
Our website publishes news, press releases, opinion and advertorials on various financial organizations, products and services which are commissioned from various Companies, Organizations, PR agencies, Bloggers etc. These commissioned articles are commercial in nature. This is not to be considered as financial advice and should be considered only for information purposes. It does not reflect the views or opinion of our website and is not to be considered an endorsement or a recommendation. We cannot guarantee the accuracy or applicability of any information provided with respect to your individual or personal circumstances. Please seek Professional advice from a qualified professional before making any financial decisions. We link to various third-party websites, affiliate sales networks, and to our advertising partners websites. When you view or click on certain links available on our articles, our partners may compensate us for displaying the content to you or make a purchase or fill a form. This will not incur any additional charges to you. To make things simpler for you to identity or distinguish advertised or sponsored articles or links, you may consider all articles or links hosted on our site as a commercial article placement. We will not be responsible for any loss you may suffer as a result of any omission or inaccuracy on the website.
News 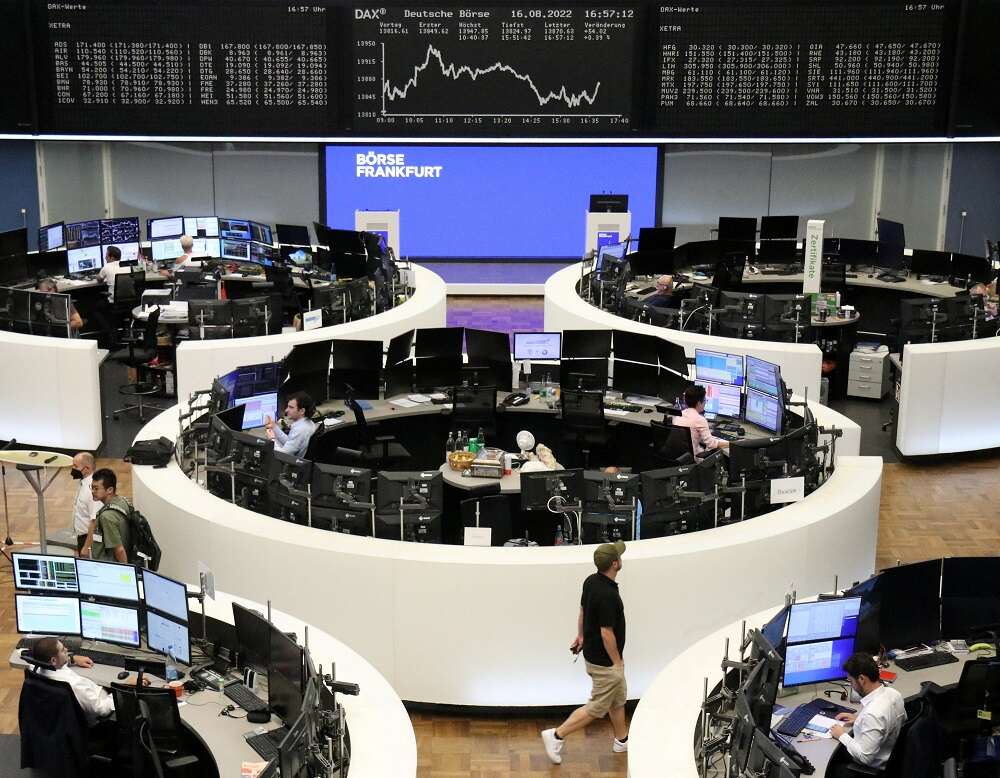 By Anisha Sircar and Shreyashi Sanyal

(Reuters) -European shares fell to their lowest level in nearly one month on Monday as worries about tightening gas supplies from Russia, hawkish signals from the European Central Bank and weak economic outlook weighed on investors’ minds.

The continent-wide STOXX 600 dropped 1.0% to touch its lowest level since July 28.

Russia will halt natural gas supplies to Europe for three days at the end of the month, energy giant Gazprom said on Friday, piling pressure on the continent as it seeks to refuel ahead of winter.

“Europe’s energy crisis is just getting bad news all over the board. Heatwaves have put a strain on supplies and it seems any disruptions in the winter could be devastating,” said Edward Moya, senior market analyst at OANDA.

The focus is on euro zone flash purchasing manager index (PMI) data, due on Tuesday, and minutes of the European Central Bank’s (ECB) last policy meeting on Thursday that are likely to sound hawkish. [O/R]

The ECB must keep raising rates even if a recession in Germany is increasingly likely, as inflation will stay uncomfortably high through 2023, Bundesbank President Joachim Nagel told a German newspaper.

Markets currently price in a 60 basis point hike for September and a combined 130 basis points of moves for the remainder of the year.

After rallying more than 11% since mid-June lows, European markets have sagged in recent days as investors fret over the impact of soaring inflation and tightening financial conditions on the economic outlook.

French supermarket retailer Carrefour fell 0.9% after saying it would freeze prices on 100 products to help people tackle soaring inflation in the country.

Shares of world No.2 cinema operator Cineworld plummeted 21.4% after it confirmed a possible Chapter 11 bankruptcy filing in the United States.