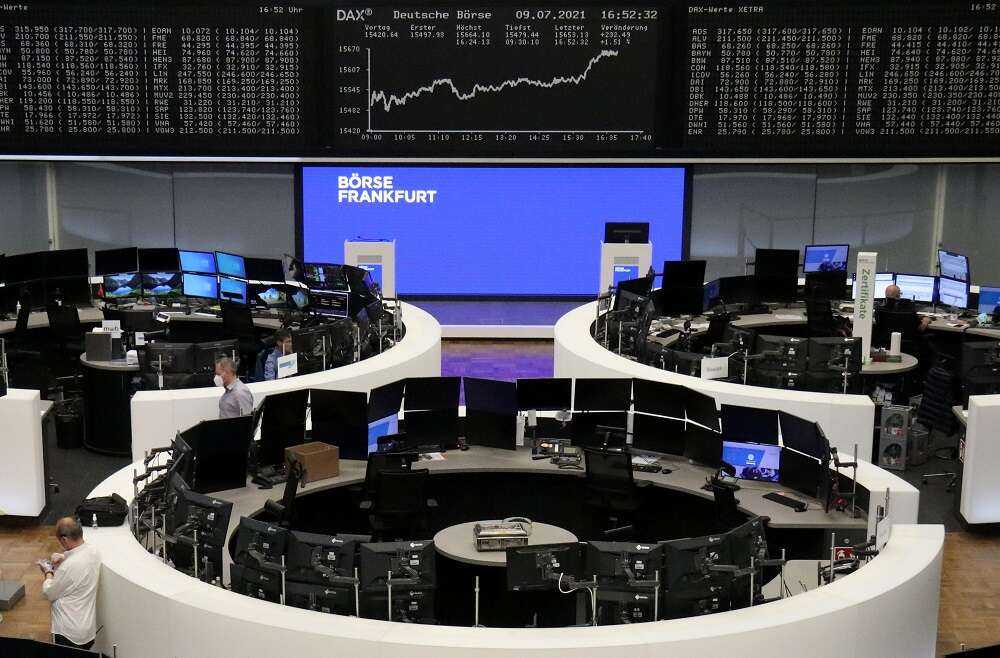 (Reuters) -European stocks jumped more than 1% on Friday, posting their best session in two months and erasing all of this week’s losses, as investors sought bargains after one of the worst sell-offs this year on global economic recovery worries.

The pan-European STOXX 600 index gained 1.3%, with sectors that took a hit earlier this week such as automakers and miners surging 4% and 3.4%, respectively. The mining sector marked its best session in two months.

French stocks rose by the most in four months, advancing 2.1% and leading gains among major European bourses.

Banks were up 2.4%, but were the hardest hit this week as government bond yields dropped. [GVD/EUR]

A fresh surge in COVID-19 cases and underwhelming U.S. and Chinese economic data raised concerns about the strength of the recovery, boosting bonds and sending the benchmark STOXX 600 1.1% lower on the week until Friday’s gains negated those losses.

But with France saying the highly contagious Delta variant of COVID-19 will probably account for most new coronavirus cases in the country from this weekend, and Spain’s tourism hotspots asking the government to bring back curfews, the path out of a pandemic-induced economic slump still looks challenging.

“This sort of angst is nothing new for markets. However, the slide in yields is telling us that the recovery is either in trouble, or merely being delayed,” CMC Markets’ Michael Hewson said in a note.

“Much is likely to depend on the vaccine rollout plans, and the speed with which it can be rolled out in the countries where cases are rising sharply.”

UK airlines such as British Airways-owner IAG, easyJet and Ryanair rose between 0.5% and 1.9%, as Britain planned to scrap quarantine for fully-vaccinated arrivals from other countries in the coming weeks.

French planemaker Airbus gained 3.4% after it reported a 52% jump in deliveries in the first half of the year.

Investors will now turn their focus to the earnings season, which kicks off in earnest next week. The bulk of the European companies are expected to report later this month, with analysts forecasting a near-109% surge in second-quarter profit for STOXX 600 companies, according to Refinitiv IBES data.

Building A Portfolio For Retirement

Is The Mobile Banking Industry Taking Over Traditional...

Most Australian lawyers and accountants are concerned about...

Orchestrating the Digital Journey – A Must for...

How observability pipelines can help businesses navigate the...

July 21, 2022
Editorial & Advertiser disclosureEditorial & Advertiser disclosureOur website provides you with information, news, press releases, Opinion and advertorials on various financial products and services. This is not to be considered as financial advice and should be considered only for information purposes. We cannot guarantee the accuracy or applicability of any information provided with respect to your individual or personal circumstances. Please seek Professional advice from a qualified professional before making any financial decisions. We link to various third party websites, affiliate sales networks, and may link to our advertising partners websites. Though we are tied up with various advertising and affiliate networks, this does not affect our analysis or opinion. When you view or click on certain links available on our articles, our partners may compensate us for displaying the content to you, or make a purchase or fill a form. This will not incur any additional charges to you. To make things simpler for you to identity or distinguish sponsored articles or links, you may consider all articles or links hosted on our site as a partner endorsed link.