Home News Macron, Le Pen battle out on cost of living in heated runoff campaign
Our website publishes news, press releases, opinion and advertorials on various financial organizations, products and services which are commissioned from various Companies, Organizations, PR agencies, Bloggers etc. These commissioned articles are commercial in nature. This is not to be considered as financial advice and should be considered only for information purposes. It does not reflect the views or opinion of our website and is not to be considered an endorsement or a recommendation. We cannot guarantee the accuracy or applicability of any information provided with respect to your individual or personal circumstances. Please seek Professional advice from a qualified professional before making any financial decisions. We link to various third-party websites, affiliate sales networks, and to our advertising partners websites. When you view or click on certain links available on our articles, our partners may compensate us for displaying the content to you or make a purchase or fill a form. This will not incur any additional charges to you. To make things simpler for you to identity or distinguish advertised or sponsored articles or links, you may consider all articles or links hosted on our site as a commercial article placement. We will not be responsible for any loss you may suffer as a result of any omission or inaccuracy on the website.
News

Macron, Le Pen battle out on cost of living in heated runoff campaign 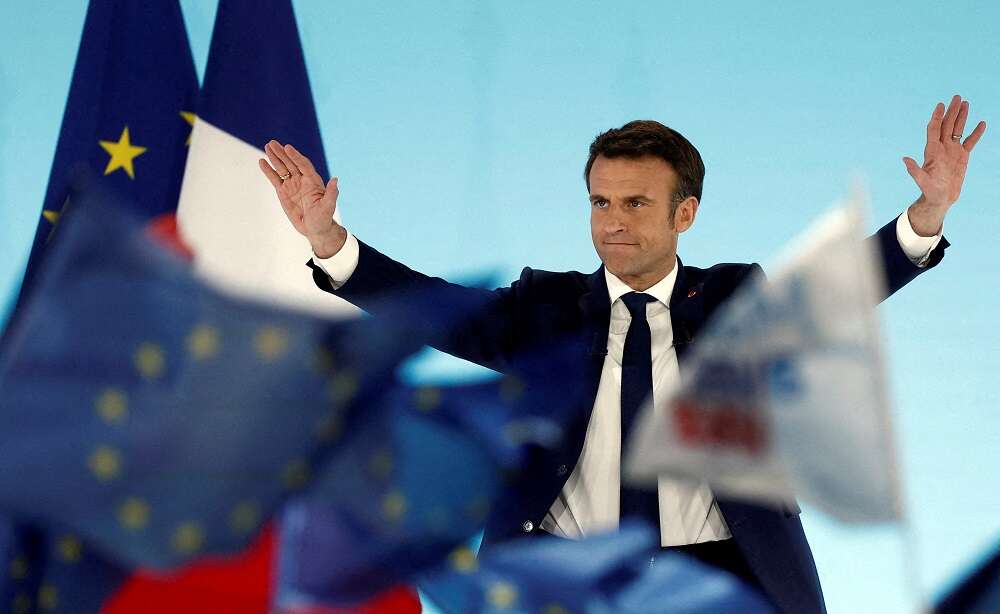 DENAIN, France (Reuters) -Emmanuel Macron and Marine Le Pen traded blows at a distance on Monday over who would best protect French voters’ purchasing power, kicking off a tense fight to win the presidential election runoff on April 24.

Macron, a pro-European centrist who became president in 2017 after easily beating Le Pen when voters rallied behind him to keep the far-right out of power, is facing a much tougher challenge this time.

He is slightly ahead in polls, but Le Pen, who ahead of Sunday’s first round successfully tapped into anger over the cost of living and a perception that Macron is disconnected from everyday hardships, pressed on those points on Monday.

“Emmanuel Macron, if by some mischance he was re-elected, would feel totally free to continue his policy of social wreckage,” Le Pen said on a visit to a rural area southeast of Paris, mocking his comments on her policy plans and urging him to read her manifesto.

Warning of the “dark clouds” that inflation cast on France, she said Macron had failed to protect the French, adding that she would, if elected, slash the VAT on energy and bring it to zero for 100 essential food and hygiene products “so the French can continue to put fuel in their car … and feed themselves.”

Macron had equally harsh words about his rival, telling La Voix du Nord newspaper in an interview on Monday, “Mrs. Le Pen is a demagogue. She is someone who tells people what they want to hear when they want to hear it.”

Macron, who has repeatedly accused Le Pen of lying, said during a visit to one of her blue-collar strongholds in the north that her economic promises were a fantasy.

He warned voters that Le Pen, who has successfully focused her campaign on the cost-of-living issues troubling millions, would not be able to finance her populist economic agenda and that she was lying to voters.

“I’m trying to make clear my programme is fair and socially minded,” Macron said on a walkabout in Denain, one of the country’s poorest towns in its former industrial heartland.

In hours of sometimes heated exchanges, locals called Macron out on everything from his plans to push back the retirement age to his saying at the height of the Omicron phase of the COVID-19 pandemic that he wanted to “piss off” anti-vaxxers.

“I said that lovingly,” he told a bewildered local about the much-commented “piss-off” comment.

“It’s all fake. … He’s coming to talk to us now because he’s scared of losing to Marine Le Pen,” 36-year-old Stephanie Berta, an unemployed mother of six and a Le Pen voter, told Reuters outside the Denain town hall.

But beyond Denain, where Le Pen on Sunday won 42% of votes in the town and the hard-left’s Jean-Luc Melenchon came second, Macron was telling voters across France he had heard their concerns and wanted to create wealth so more could be redistributed.

He said he was ready to adapt his platform and improve it, in particular to better protect the environment.

A Le Pen win would send shockwaves across Europe and beyond, and deliver a jolt to the establishment similar to Britain’s Brexit vote to leave the European Union or Donald Trump’s 2017 entry into the White House.

France’s Medef employers group said that Macron’s policy plans were best placed to help boost growth in France, while Le Pen’s project would lead the country to lag behind its neighbours and trigger “a very strong and unfunded increase in public spending expenditure (which) would risk placing the country in an impasse”.

Le Pen, who has left the core of her far-right, anti-immigration programme unchanged, has focused her campaign on social policies including cutting the retirement age to 60 for those who start work before 20, scrapping income tax for the under-30s, and reducing the VAT on energy to 5.5% from 20%. She says her numbers add up.

Sunday’s first round dealt a devastating blow to the traditional parties of the centre-left and centre-right, which governed France for decades.

Putin says peace talks with Ukraine are at dead end, goads the West