Myanmar a no-show at summit after ASEAN sidelines junta boss 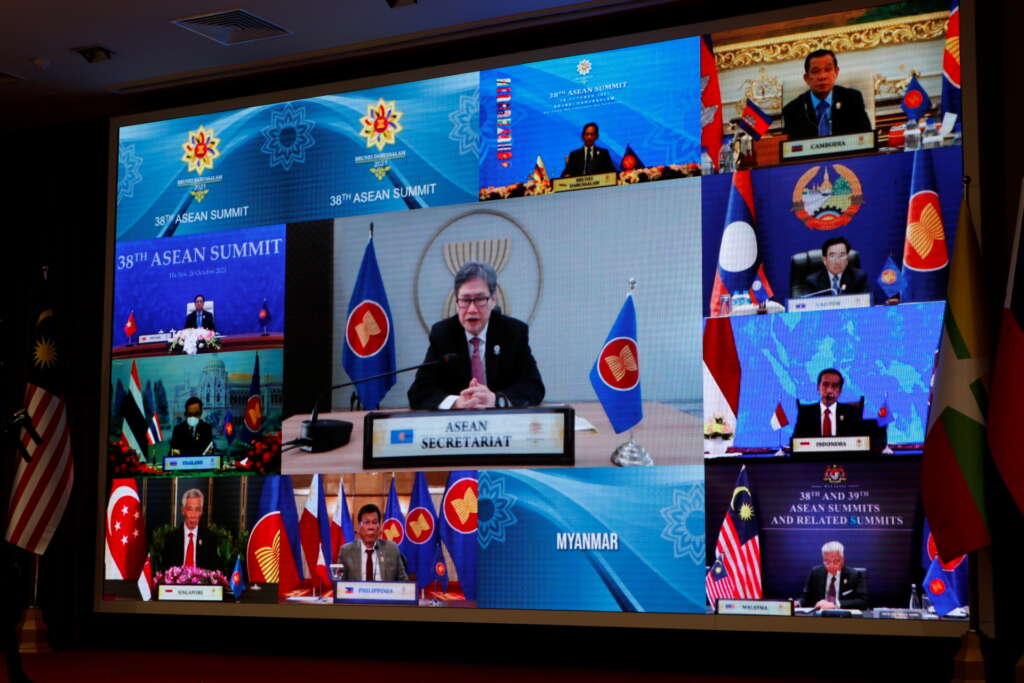 BANDAR SERI BEGAWAN (Reuters) – A Southeast Asian summit started on Tuesday without military-ruled Myanmar, after its junta refused to send a representative following its leader’s exclusion for ignoring a peace roadmap agreed six months ago.

The Association of Southeast Asian Nations (ASEAN) had said it would accept a non-political representative from Myanmar, but the junta said on Monday it would only agree to its leader or a minister attending.

Myanmar’s absence was not mentioned by either Brunei, the ASEAN chair, or the 10-member bloc’s secretary-general, at the opening of the virtual meeting.

ASEAN decided to sideline from the summit junta chief Min Aung Hlaing, who led a Feb. 1 coup against an elected government, for his failure to cease hostilities, allow humanitarian access and start dialogue with opponents, as agreed with ASEAN in April.

After Tuesday’s leaders meeting, Malaysian Prime Minister Ismail Sabri Yaakob said on Twitter he fully supported Brunei’s decision on Myanmar’s representation, while Thai counterpart Prayuth Chan-ocha said ASEAN’s dealings with Myanmar were crucial for its reputation and a test of its resolve.

“ASEAN’s constructive role in addressing this situation is of paramount importance and our action on this matter shall have a bearing on ASEAN’s credibility in the eyes of the international community,” Prayuth said, according to his office.

The sidelining of Min Aung Hlaing was a huge insult to the junta and a rare, bold step by a regional grouping known for its code of non-interference and engagement.

Myanmar’s military, which ruled the country for 49 of the past 60 years, objected strongly, accusing ASEAN of departing from its norms and of allowing itself to be influenced by other countries, including the United States.

ASEAN made the call days after its special envoy Erywan Yusof said he would not be given access to all parties in the country, including ousted leader Aung San Suu Kyi, who is charged with multiple crimes.

Prayuth, a former coup leader in Thailand, urged Myanmar to follow its commitments and for Erywan to visit soon and make an “important first step in the process of confidence-building”.

Prayuth “expressed hope that Myanmar will trust ASEAN in helping Myanmar to achieve peace and harmony, as well as to return to the democratic process.”

Myanmar security forces have killed more than 1,000 civilians and detained thousands more, subjecting many to torture and beatings, according to United Nations envoys, who say the army’s excessive use of force has displaced tens of thousands of people.

Myanmar has rejected that as biased and exaggerated by unreliable sources and says the conflict is being stoked by “terrorists” allied with a shadow National Unity Government (NUG).

U.S. National Security Advisor Jake Sullivan met on Monday with representatives of the NUG, an alliance of pro-democracy groups, local militias and ethnic minority armies formed after the coup.

ASEAN leaders were due also to collectively meet leaders of the United States, China and South Korea.

U.S. President Joe Biden will attend a joint session of the ASEAN summit by video link.

Michael Vatikiotis, Asia Director of the Geneva-based Centre for Humanitarian Dialogue, said Myanmar’s junta “probably cares about being frozen out of the summit”, although it has a history of enduring international isolation.

“The question now is whether regional leaders will agree to engage with the parallel National Unity Government more formally, as the U.S. and EU has started to do,” he said.

Exclusive-German govt expects inflation to surge to 2.9% in 2021 – source