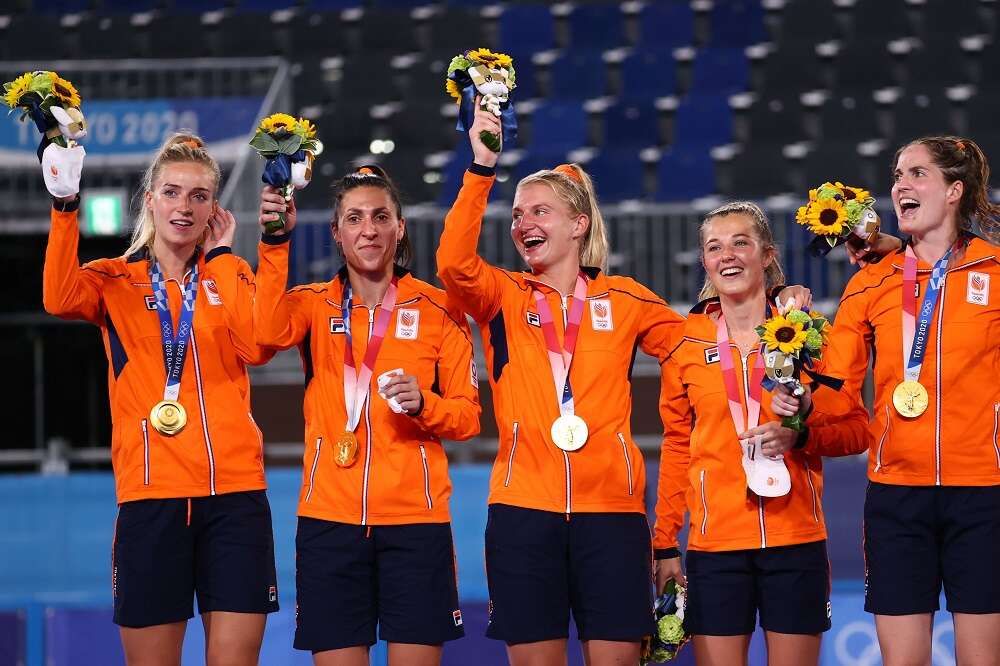 TOKYO (Reuters) -The Netherlands won their fourth Olympic women’s hockey title by beating Argentina 3-1 in the final at the Tokyo Games on Friday.

The Netherlands effectively settled the match in the second quarter, scoring three times off penalty corners, with one goal from Margot van Geffen and two from Caia van Maasakker.

Argentina replied with moments left to play in the first half when Agustina Gorzelany also scored off a penalty corner.

Las Leonas kept fighting after the halftime break but were unable to score again, settling for the silver medal.

“It’s amazing,” Netherlands captain Eva de Goede said. “I just can’t believe that we actually did it. We worked so hard for it.”

The win gave De Goede and team mate Lidewij Welten their third Olympic gold in women’s hockey, after they also earned the top prize at the 2008 and 2012 Games.

“It’s the cherry on the pie. It’s really incredible,” Welten said. “We’ve both had an incredible career and still going so that’s amazing.”

The two sides also played each other in the final at the 2012 London Olympics, when the Netherlands took home the gold.

Britain earned the bronze medal with a hard-fought 4-3 win over India in hot conditions earlier on Friday.

Britain, who had won gold at the 2016 Rio Olympics, took a two-goal lead in the second quarter through Elena Rayer and Sarah Robertson.

Britain then conceded another goal that gave India a 3-2 lead going into the break, but they kept fighting to turn the tables in the final leg of their Tokyo campaign.

Hollie Pearne-Webb equalised in the 35th minute, before Grace Balsdon scored Britain’s winning goal from a penalty corner in the last quarter.

“Really pleased that we could come here and get it across the line,” Pearne-Webb told reporters.

India’s loss meant the women’s team could not match the feat of the men’s team https://www.reuters.com/lifestyle/sports/hockey-india-win-bronze-after-5-4-win-over-germany-2021-08-05, who won the country’s first Olympic hockey medal in 41 years, prevailing in a nine-goal thriller against Germany in the bronze medal match.

How COVID has transformed businesses for greater profitability and sustainability