Our website publishes news, press releases, opinion and advertorials on various financial organizations, products and services which are commissioned from various Companies, Organizations, PR agencies, Bloggers etc. These commissioned articles are commercial in nature. This is not to be considered as financial advice and should be considered only for information purposes. It does not reflect the views or opinion of our website and is not to be considered an endorsement or a recommendation. We cannot guarantee the accuracy or applicability of any information provided with respect to your individual or personal circumstances. Please seek Professional advice from a qualified professional before making any financial decisions. We link to various third-party websites, affiliate sales networks, and to our advertising partners websites. When you view or click on certain links available on our articles, our partners may compensate us for displaying the content to you or make a purchase or fill a form. This will not incur any additional charges to you. To make things simpler for you to identity or distinguish advertised or sponsored articles or links, you may consider all articles or links hosted on our site as a commercial article placement. We will not be responsible for any loss you may suffer as a result of any omission or inaccuracy on the website.
Home News S.Korea calls for talks as N.Korea test fires missiles 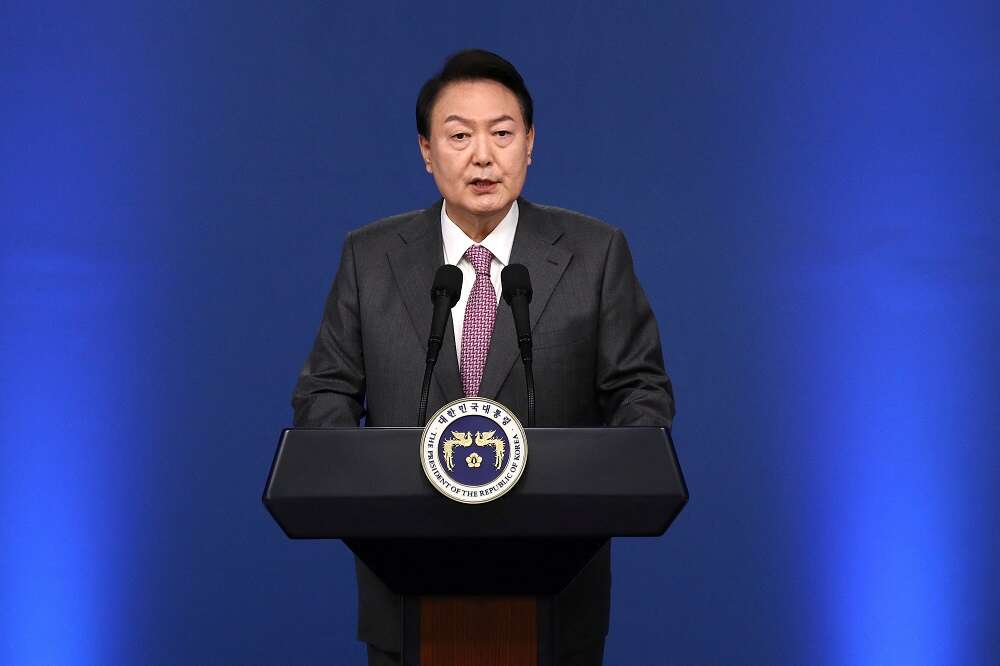 By Hyonhee Shin and Soo-hyang Choi

SEOUL (Reuters) – Talks with North Korea should not be for political show but contribute to establishing peace, South Korean President Yoon Suk-yeol said on Wednesday, just hours after the North test fired two cruise missiles into the sea.

Speaking at a wide-ranging news conference to mark his first 100 days in office, Yoon made no mention of the launches, which were only publicly reported later by the South Korean military.

Yoon repeated his willingness to provide phased economic aid to North Korea if it ended nuclear weapons development and began denuclearisation, noting that he had called for a dialogue with Pyongyang since his campaign.

“Any dialogue between the leaders of the South and North, or negotiations between working-level officials, should not be a political show, but should contribute to establishing substantive peace on the Korean peninsula and in Northeast Asia,” he said.

Despite those meetings, denuclearisation talks stalled in 2019 and North Korea has said it will not trade away its self-defence, though it has called for an end to sanctions. It has been observed preparing for a possible nuclear test, which would be its first since 2017.

North Korea’s launches on Wednesday were the first reported in months, and come a day after South Korea and the United States began preliminary joint drills ahead of a restart of live field training halted under Moon.

Yoon said South Korea was not in a position to guarantee the North’s security if it gave up its nuclear weapons, but Seoul did not want a forced change in the status quo in the North.

The North’s recent missile tests and nuclear development has revived debate over whether the South should pursue its own nuclear weapons. Yoon said that he was committed to the Treaty on the Non-Proliferation of Nuclear Weapons (NPT) and working with the United States to boost its “extended deterrence” for South Korea.

“The NPT should not be abandoned and I will adhere to that until the end,” he said.

Facing falling poll numbers and controversies over his picks for top ministers, Yoon was pressed by media on a range of issues including labour reform, housing shortages, and recovery from recent floods.

Since Yoon came to office in May, two strikes have cost industry more than $1.6 billion, according to labour ministry and shipbuilder estimates, although neither involved a government suppression before ending.

The president said he would always allow time for dialogue and compromise before suppressing an illegal strike.

Yoon called for ending discrepancies between “workers who do the same job”, such as between direct hires and contract workers, without elaborating on how.

He declined, however, to say whether his government would change its policy of not directly providing lethal aid to Ukraine.

“While it’s difficult to elaborate here on the issue of supplying military support, we will help the Ukrainian people recover freedom and rebuild the destroyed national assets swiftly,” Yoon said.

He said he believed that historical disputes with Japan dating back to its colonial occupation of the Korean peninsula from 1910-1945 could be overcome and that the two countries needed to cooperate more closely on supply chain and economic security.