Our website publishes news, press releases, opinion and advertorials on various financial organizations, products and services which are commissioned from various Companies, Organizations, PR agencies, Bloggers etc. These commissioned articles are commercial in nature. This is not to be considered as financial advice and should be considered only for information purposes. It does not reflect the views or opinion of our website and is not to be considered an endorsement or a recommendation. We cannot guarantee the accuracy or applicability of any information provided with respect to your individual or personal circumstances. Please seek Professional advice from a qualified professional before making any financial decisions. We link to various third-party websites, affiliate sales networks, and to our advertising partners websites. When you view or click on certain links available on our articles, our partners may compensate us for displaying the content to you or make a purchase or fill a form. This will not incur any additional charges to you. To make things simpler for you to identity or distinguish advertised or sponsored articles or links, you may consider all articles or links hosted on our site as a commercial article placement. We will not be responsible for any loss you may suffer as a result of any omission or inaccuracy on the website.
Home News UK trial lawyers to end strike after accepting government pay offer 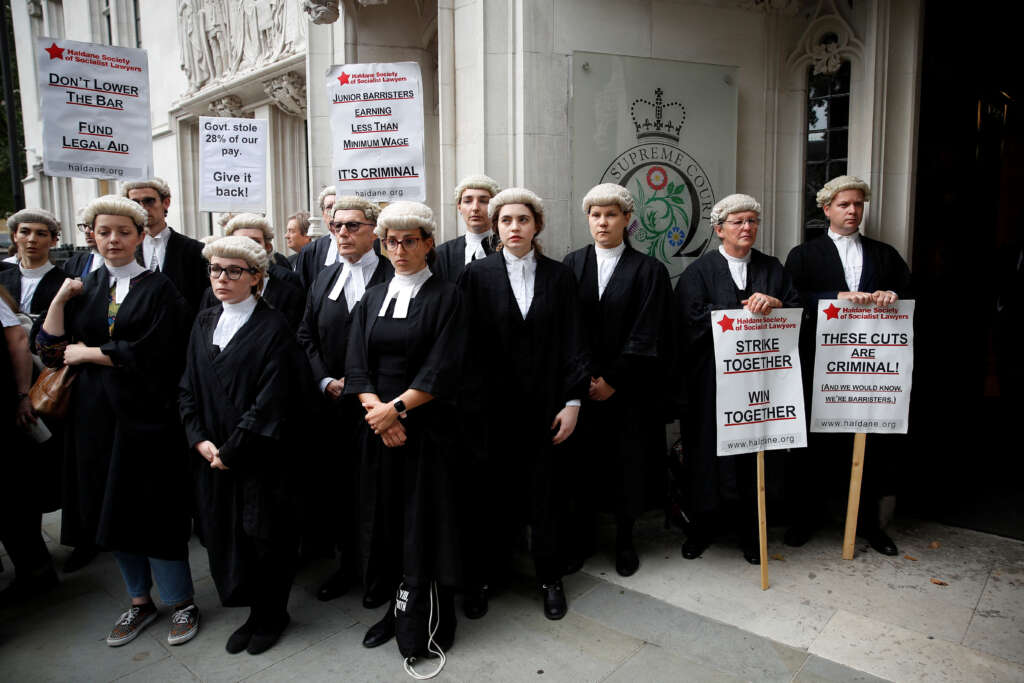 LONDON (Reuters) – British trial lawyers will end a weeks-long strike on Monday after voting to accept the government’s pay offer, their union said.

The Criminal Barristers Association (CBA), which has more than 2,000 members and represents barristers in England and Wales, said roughly 57% of trial lawyers balloted on the government’s pay offer had accepted it.

Criminal barristers walked out indefinitely on Sept. 5, refusing to take on new cases after weeks of intermittent action over the summer in a dispute over government funding.

The government offered a 54 million pound investment along with a 15% fee rise for criminal barristers that would apply to the vast majority of cases currently in the Crown Court.

The CBA described the offer as an “overdue start”, saying it would hold another ballot for a strike if it is not implemented.

Lawyers who act in criminal court cases have said real earnings have dropped 28% since 2006, with junior barristers earning a median income of only 12,200 pounds ($13,500) in their first three years, forcing many to quit.

“The underlying causes that compelled us to commence action, as a unified group, have not gone away,” the CBA said. “The Criminal Justice System remains chronically underfunded.”

“This breakthrough is a result of coming together and restarting what I hope to be a constructive relationship as we work to drive down the backlog and ensure victims see justice done sooner,” he said.

Industrial unrest has affected a range of professions in Britain this year, from medics and postal workers to rail staff and pilots, as rising costs of living spur demands for better pay and conditions.

After fleeing war, Ukrainians struggle to settle around Europe

Cash is king, could Cheque be right?