Our website publishes news, press releases, opinion and advertorials on various financial organizations, products and services which are commissioned from various Companies, Organizations, PR agencies, Bloggers etc. These commissioned articles are commercial in nature. This is not to be considered as financial advice and should be considered only for information purposes. It does not reflect the views or opinion of our website and is not to be considered an endorsement or a recommendation. We cannot guarantee the accuracy or applicability of any information provided with respect to your individual or personal circumstances. Please seek Professional advice from a qualified professional before making any financial decisions. We link to various third-party websites, affiliate sales networks, and to our advertising partners websites. When you view or click on certain links available on our articles, our partners may compensate us for displaying the content to you or make a purchase or fill a form. This will not incur any additional charges to you. To make things simpler for you to identity or distinguish advertised or sponsored articles or links, you may consider all articles or links hosted on our site as a commercial article placement. We will not be responsible for any loss you may suffer as a result of any omission or inaccuracy on the website.
Home News China battles forest fires as fears linger over harvest 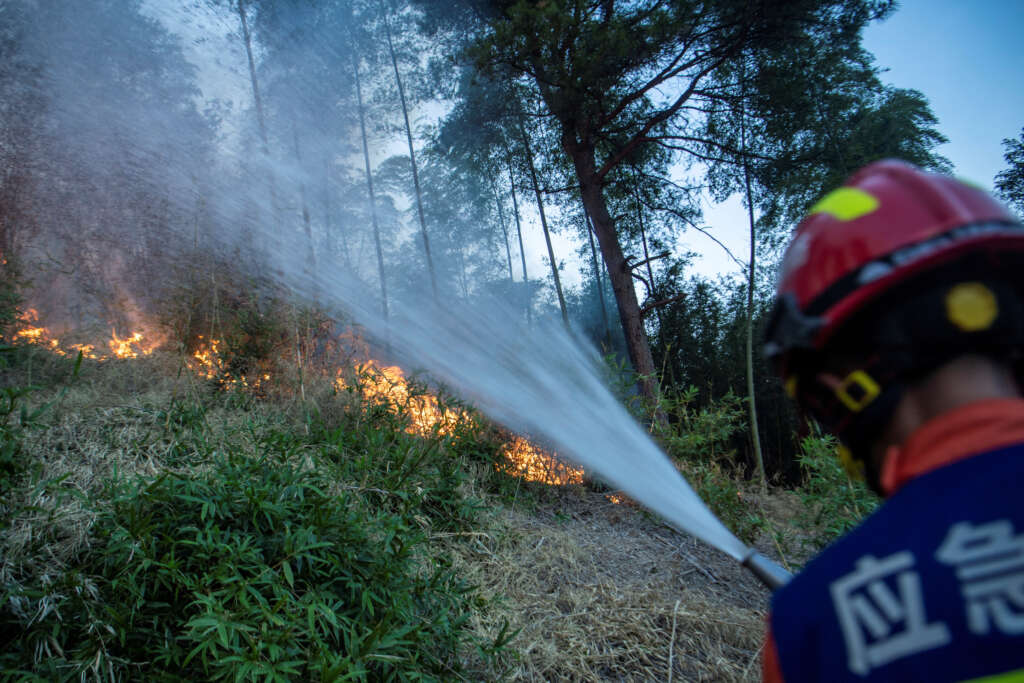 SHANGHAI (Reuters) -The southwestern Chinese regions of Chonqging and Sichuan were battling fires on Tuesday as they awaited a long-anticipated drop in temperatures over the next week, but the country’s important autumn harvest remained under serious threat.

Officials warned this month that temperatures were rising faster in China than in the rest of the world and a record-breaking heatwave has raised concern about its ability to adapt to rapid climate change and conserve already scarce water resources.

Satellite images showed Poyang Lake, which usually takes in floodwaters from the Yangtze River over the summer, at a fraction of its normal size for the time of year, reducing drinking water supplies for nearby communities, state broadcaster CCTV said.

Water from the Three Gorges and Danjiangkou reservoirs had already been released to alleviate downstream shortages, the broadcaster said.

The drought posed a “severe threat” to China’s autumn crops, the ministry of agriculture said in a notice, adding that authorities had been instructed to do everything they could to increase water supplies and protect the harvest.

Farmers suffering from severe crop damage would be urged to replant, and cloud-seeding rockets would be made available wherever possible, the ministry said.

State forecasters said the heatwave, which has lasted more than two months, was about to hit a “turning point”, with a cold front coming in from the west and a typhoon approaching in the southeast.

Still, severe electricity shortages continued throughout the region, with the Sichuan capital of Chengdu turning the lights off on its subway trains to save power.

High temperatures drove up air conditioner use to around a third of the province’s total power load, and hydropower generation is down by half as a result of low water levels.

Despite the power shortfall, which has led to curbs on industrial usage, economists at ANZ said in a note it was unlikely China would see a repeat of last year’s nationwide energy shortage, which was caused by tight coal supplies.

The impact on gross domestic product was “negligible” for now, ANZ said.

Sichuan normally delivers huge volumes of hydroelectric power to the east coast via the power grid, and the lower output means that coal-fired power plants elsewhere have had to pick up the slack.

CCTV said that coal plants in the central province of Anhui were operating at maximum capacity and had generated 12% more electricity than normal in order to meet demand from eastern regions.

Though a heat “red alert” remains in place for a 12th day, temperatures are expected to fall in central regions by Wednesday, and in Sichuan and Chongqing from Aug. 29, the National Meteorological Center said on its Weibo channel.

Heavy rainfall could hit mountainous western Sichuan on Aug. 27-28, raising flooding and landslide risks, media said, citing the Sichuan Hydrological and Water Resources Survey Center. Authorities should take the opportunity to store as much water as possible, it said.

Authorities also raised a fire “red alert”, warning that the situation was “extremely dangerous” in the forested areas of central and southern Chongqing and eastern Sichuan, the official China News Service reported.

Chongqing and Sichuan, where rainfall has been 80% less than normal, have had to deal with as many as 19 wildfires since Aug. 14, according to financial news service Caixin.

No deaths or injuries have been reported but Chongqing was forced to move 1,500 people because of the fire risk, authorities there said.

The provinces of Jiangxi, Hunan and Guizhou are also on high alert for forest and grassland fires, the Ministry of Emergency Management warned.

The ministry said it had dispatched more than 2,800 state-level firefighters to Chongqing and Sichuan to help.

(Reporting by David Stanway and the Beijing newsroom; Editing by Christian Schmollinger and Gerry Doyle)