Home Digital DIGITAL TRAIL
Our website publishes news, press releases, opinion and advertorials on various financial organizations, products and services which are commissioned from various Companies, Organizations, PR agencies, Bloggers etc. These commissioned articles are commercial in nature. This is not to be considered as financial advice and should be considered only for information purposes. It does not reflect the views or opinion of our website and is not to be considered an endorsement or a recommendation. We cannot guarantee the accuracy or applicability of any information provided with respect to your individual or personal circumstances. Please seek Professional advice from a qualified professional before making any financial decisions. We link to various third-party websites, affiliate sales networks, and to our advertising partners websites. When you view or click on certain links available on our articles, our partners may compensate us for displaying the content to you or make a purchase or fill a form. This will not incur any additional charges to you. To make things simpler for you to identity or distinguish advertised or sponsored articles or links, you may consider all articles or links hosted on our site as a commercial article placement. We will not be responsible for any loss you may suffer as a result of any omission or inaccuracy on the website.
Digital 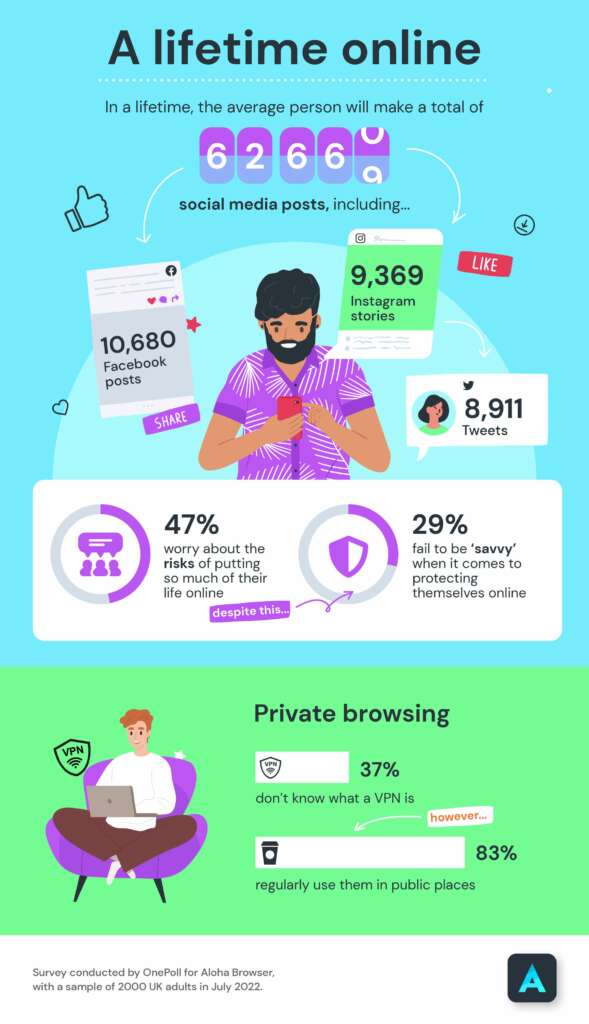 Brits will leave behind an online trail of 9,828 photos, 10,811 social media posts and 126 email addresses across their lifetime.

A study of 2,000 adults found more than a third (36 per cent) of our lives are now shared online, which will be viewable even when we’re no longer here.

Similarly, adults have two active email addresses for both personal and work use and will have signed up to over 500 mailing lists.

When quizzed on the safety aspect of this, 47 per cent do worry about the risks of putting so much of their life online – despite 29 per cent failing to be ‘savvy’ when it comes to protecting themselves.

A spokesperson for Aloha Browser, which commissioned the study, said: “We all put so much of our lives online nowadays because it’s considered ‘the norm’.

“But we are not giving our online privacy the attention it deserves. It really is simple to protect your privacy online but far too many people aren’t taking the simple, yet necessary steps ”

Using secure passwords is the top thing people do to improve their internet privacy (47 per cent).

While four in 10 never disclose their main email address or phone number and a further 39 per cent refrain from using public storage websites such as Google Docs or Dropbox.

But despite strong passwords being the main way people protect themselves, more than half (57 per cent) still receive warnings about them potentially being compromised.

Nearly half (49 per cent) are apprehensive about online safety with not wanting to be scammed (67 per cent) cited as the top reason for this.

And two thirds worry about having their identity stolen whereas 33 per cent would be embarrassed if they ever got ‘tricked’, according to the OnePoll study.

The average adult is recipient of three scam attempts every month with 34 per cent agreeing it’s only a matter of time until their data is compromised.

What’s more, 37 per cent don’t know what a VPN is and as many as 83 per cent admit they regularly use them in public places.

The spokesperson added: “It’s clear from the research a lot of people are still unsure about how to best protect themselves online and even the risks that are associated with being so volatile. That’s why browsers like our exist – to help consumers protect themselves”

“As a nation, we need to become savvier with how we use the internet and what we do with it.”

How tech can support Boohoo’s new CFO navigate its challenges

Onfido launches Motion, the next generation of facial...

Avast Commits to Becoming a Founder of the...

The Most Profitable Retro Phones:New study reveals which...

The most hyped upcoming games, according to Google