Home News Sky no longer the limit for Germany’s ‘Mainhattan’ skyscraper boom
Our website publishes news, press releases, opinion and advertorials on various financial organizations, products and services which are commissioned from various Companies, Organizations, PR agencies, Bloggers etc. These commissioned articles are commercial in nature. This is not to be considered as financial advice and should be considered only for information purposes. It does not reflect the views or opinion of our website and is not to be considered an endorsement or a recommendation. We cannot guarantee the accuracy or applicability of any information provided with respect to your individual or personal circumstances. Please seek Professional advice from a qualified professional before making any financial decisions. We link to various third-party websites, affiliate sales networks, and to our advertising partners websites. When you view or click on certain links available on our articles, our partners may compensate us for displaying the content to you or make a purchase or fill a form. This will not incur any additional charges to you. To make things simpler for you to identity or distinguish advertised or sponsored articles or links, you may consider all articles or links hosted on our site as a commercial article placement. We will not be responsible for any loss you may suffer as a result of any omission or inaccuracy on the website.
News

Sky no longer the limit for Germany’s ‘Mainhattan’ skyscraper boom 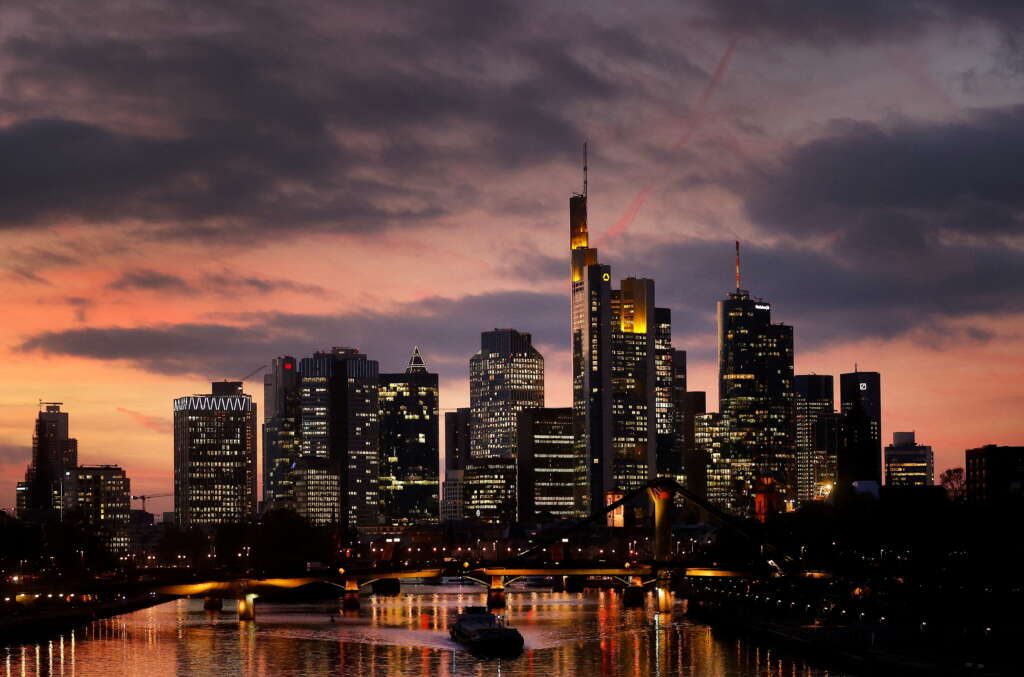 FRANKFURT (Reuters) – Towering above a nondescript office quarter of downtown Frankfurt, a 47th floor three-bedroom apartment is on sale for 9 million euros ($10 million), a lofty price some see as a warning.

Dubbed “Mainhattan” by locals in a nod to its skyscrapers and location on the Main river, Germany’s financial hub may be a far cry from New York in terms of nightlife, culture and banking but it did beat it to top a 2021 real estate bubble index.

Having long shunned property ownership, rock-bottom borrowing costs, rising rents and for some the impact of having to pay to keep their money in the bank have persuaded almost one in two Germans to buy a house or apartment.

The ensuing property rush is seeing 18 high-rise buildings spring up across Frankfurt, a building frenzy replicated across Germany, where prices have hit record highs, with the cost of houses up roughly 50% since mid-2016.

Frankfurt beat Hong Kong, Toronto and New York in the 2021 UBS ‘bubble’ ranking, with nearby Munich also near the top.

And since the middle of 2019, German real estate price rises have outstripped much of the rest of Europe, including France and Britain, and during the second quarter of 2021 house prices jumped more than 10% compared to a year earlier.

The demand has been highlighted by moves such as German insurer Allianz and a local pension fund this year paying 1.4 billion euros ($1.6 billion) for one of a development of four new skyscrapers planned for the financial capital.

The project, known as FOUR, includes offices as well as two bedroom apartments with a price tag of around 3 million euros.

“We are targeting the Frankfurt area,” the developers behind the project said. The city is one of the wealthiest in Germany. “The demand has confirmed this was the right approach. We don’t see a bubble.”

While there has been a steady build-up of interest, coronavirus has turbo-charged property investment as Germany’s traditional savers have had even more money to put aside and deposits have been hit by negative interest rates.

Borrowing to buy property has picked up speed during the pandemic, according to the latest data from Germany’s Bundesbank. Home loans reached 1.45 trillion euros at the end of 2020, roughly 6% higher than a year earlier and data for this year show this borrowing has continued to grow.

‘SKY NOT THE LIMIT’

As the ongoing pandemic curbs immigration and bolsters tenant protection, while Germany’s ageing population shrinks ever faster, some observers say the seeds have been sown for property prices to unwind.

The Bundesbank warned in November of the risks of an overheated property market, cautioning that it could be overvalued by as much as 30%.

“We need immigration of roughly 220,000 just to keep the population, and demand for property, stable. But immigration has taken a hit from Corona,” Jochen Moebert, an economist with Deutsche Bank Research, said, adding that net immigration fell from up to 400,000 before the pandemic to 220,000 last year.

Moebert forecasts that this, coupled with stricter rules to make homes energy efficient and rent controls mean the property market could turn in 2024.

“We’re reaching the top,” he said.

Barbara Steenbergen of the International Union of Tenants said that the pandemic had tightened controls on European property investors by restricting foreign buyers from snapping up ordinary homes in Amsterdam and elsewhere.

“The markets for investors are becoming more regulated across Europe,” she said.

In Frankfurt, there are the first signs of a turn, with plans for a Porsche-branded designer apartment tower dropped.

And local officials agree the top may have been reached.

“The sky is not the limit for property prices,” a spokesman for Frankfurt’s planning department told Reuters.

“For luxury apartments, what we have is enough.”

How virtual reality is pushing the boundaries of corporate training